Architect Pierre Cuypers designed the Rijksmuseum around this masterpiece in 1885 and it was the only work to be returned to its original location by our teams in the radically revamped museum.
Crown Fine Art moved The Night Watch, Rembrandt van Rijn's world-renowned painting and famous for its enormous size, ahead of and following the Rijksmuseum's milestone ten-year renovation. 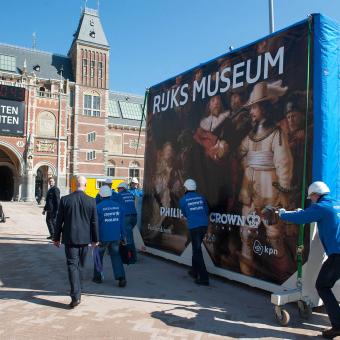 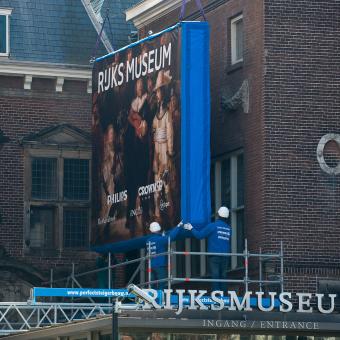 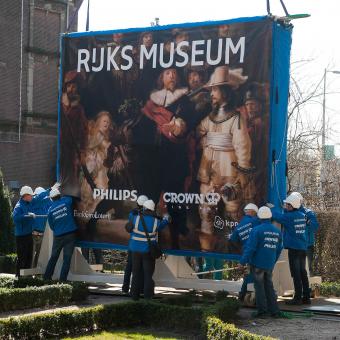 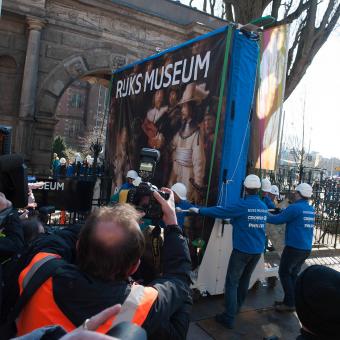 Measuring 12 feet by 14 feet, the painting created at the height of the Dutch Golden Age was first moved in December 2003 by our teams to the Philips Wing in the Rijksmuseum ahead of the Museum’s renovation.
One of the most famous paintings in the world, The Night Watch captures Captain Frans Banning Cocq's militia company in 1642. Architect Pierre Cuypers designed the Rijksmuseum around this masterpiece in 1885 and it was the only work to be returned to its original location by our teams in the radically revamped museum.
Throughout history, the painting has rarely been moved. In 1715, it was shifted from the headquarters of Captain Banning Cocq's company to the Town Hall, now the Royal Palace on Dam Square. The painting was then transferred to the newly built Rijksmuseum in 1885, only to be removed and hidden in bunkers for safekeeping during World War II. The last time The Night Watch was moved was in the care of Crown Fine Art.
Visitors now approach Rembrandt's painting through the cathedral-like entrance hall of the Rijksmuseum filled with jewel-toned stained glass, and the restored Gallery of Honor, home to the Rijksmuseum's collection of other 17th century works. Beneath it the only escape slide in the entire museum, designed in 1934 to ensure the safety of this national treasure for centuries to come.